Sydney Opera House Failed Project - What Can You Learn?

This post is the first in a series of posts discussing some of the most prominent failed projects and how you can avoid the same pitfalls.

Every project, regardless of its subject matter, starts with an idea and ends (if successful) with a functioning reality of the idea's intent. Projects that fail are sometimes considered losses, but, most often, they also offer excellent lessons on how to avoid repeating the failures in the future. The Sydney, Australia Opera House is a notable example.

You can't tell from looking at it, but Sydney Australia's iconic Opera House is actually a study in a project failure. Its original plan had a four-year timetable and an AU $7 million budget, but in the end, it took AU $102 million and 14 years to complete.

Fortunately, the final product more than met the expectations of Opera-goers, the world's architectural community, and ultimately the Australian government, which recouped the massive cost after only two years. How the project rolled out over time offers a series of abject lessons in how not to manage a construction (or any kind of) project. 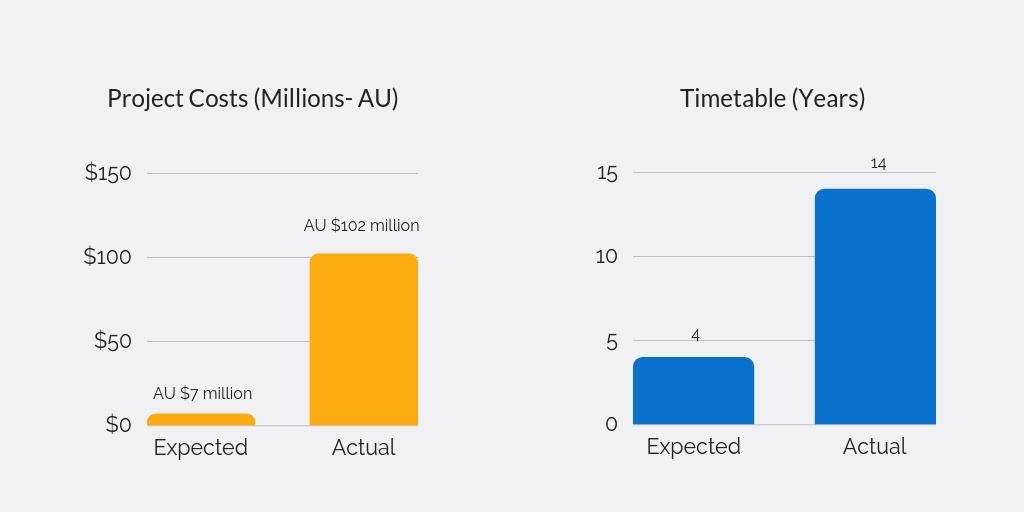 The Opera House project failed because it did not follow any of the processes that normally signify proper project management and accounting processes:

What were the circumstances?

In 1957, Australia's government (the client) held a contest to select an architect to design its future "National Opera House." The client's primary focus was to showcase Australia's creative and technical capacities, and it set almost no parameters on the building's cost or construction timeframe.

In 1958, the winner of the competition, Jorn Utzon, presented his "Red Book" of the project, which contained details of some but not all of the elements of the overall project, such as designs, consultant reports, and varied plans. The "Red Book" was not a comprehensive working document for strategizing the construction of the building. 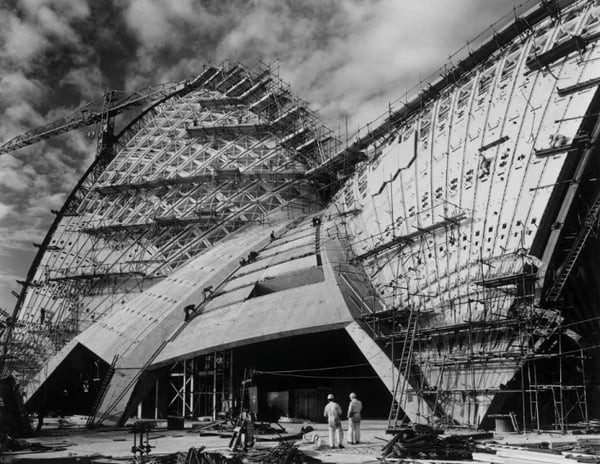 The Opera House under construction in 1965. Image: Max Dupain, State Library of NSW

And, despite the fact that Utzon clearly stated he hadn't finished the structural design, the client insisted on immediately beginning work on the project anyway. From there, things went from bad to worse, with contributions to the growing debacle amassing over time.

Not only did the project launch with no finalized plans to follow, but the client also changed the floor plan from two theaters to four shortly after construction began. Compounding the chaos that followed was the lack of a project manager. Instead of a single person to whom to turn with questions and for direction, an ad hoc "partnership" between Utzon and the engineer, Ove Arup, handled "management" of the project, assisted by a hastily assembled "team" of electrical, mechanical, and HVAC subcontractors.

Since each separate "management team" member had different goals and perspectives from the others, it's not surprising that finding consensus among them was often an elusive goal.

Not having a finalized design also meant not knowing how much the project would cost. Almost immediately upon its start, costs began escalating, first with the change orders, and then with the discovery that the site surveys were wrong. The budget went uphill from there. Utzon's vision divided the construction project into three segments: the podium; the outer shells, and the interiors and windows. By the end of stage one, a government monitoring committee was overseeing payments and had to withhold a few until it received proof of completion of actual work.

By 1966, seven years from the time it started and four years after the proposed completion date, the Opera House had not yet completed phase two. Utzon left in frustration, taking his designs and plans with him. "Management" of the rest of the project fell to a committee of three Australian engineers, who did complete phase two by the end of 1967.

However, because the next phase required an entirely new set of plans, the budget to fill out the construction then soared to AU $85 million. Another four years and an additional AU $17 million went by before the Opera House was finally completed in 1973 when Queen Elizabeth inaugurated it.

Despite being such an excellent example of "what not to do," project management professionals continue to follow the dubious lead of the people who built the Opera House. In a 2015 survey by Raconteur, the top three reasons for failed projects within the previous 12 months were:

Fortunately, today's project management professionals have advanced technology available to prevent cost, timing, and personnel challenges in the first place, or to circumvent those issues that do arise to reduce their impact on the overall project. Software designed to manage project resources such as materials, subcontractors, or other critical elements can help overseers avoid missing the minute details that can derail the production process. Professional Services Automation (PSA) is particularly useful for comprehensively evaluating project processes over time and helps to keep Key Performance Indicators and other metrics on task and on track.

Perhaps if the Australians had had the opportunity to access today's project management software capabilities, they would have been enjoying the world's most iconic Opera House a decade earlier.