Construction project failures of bygone years often offer an educational perspective on the follies of project leaders and design professionals. Most of the time, the anecdotes act as horrible warnings, not excellent examples, of what (not) to do to complete a project on time and on budget.

However, when the failed project involves a federal government, hundreds of millions of dollars in cost overages, and is still in the making, the "lessons" are harder to watch. The facts of the Aurora CO Veteran’s Administration (VA) hospital case, however, continue to offer excellent lessons in what not to do when launching a project of any size or complexity.

Background on the Project

In 2007, the U.S. Veteran's Affairs Administration (the VA) began the design phase for a Veteran's Medical Center and Hospital University in the Denver suburb of Aurora. The goal was to create a state-of-the-art medical campus across 31 acres. Its original budget was $582.8 million with an estimated completion date sometime in 2014. In 2010, the VA signed on Kiewit-Turner (KT) as the general contractor, which promptly began pre-construction work.

A preview of what the 31 acre state-of-the-art medical campus was to look like.

Within months, KT determined that the budget was too low, and, to address the concern going forward, it and the VA created "The Book" - a guide to the construction plan that escalated the budget to $604 million. "The Book" also gave KT additional allowances from the initial agreement, as well as authority to make design changes. Unfortunately, official management of the project was vested in the VA's Washington D.C. office, not the local Colorado office, and those distant VA executives disagreed with the new terms.

Further, because there were no VA authorities on-site to review, well, anything, no one at the D.C. office bothered to look at "The Book." Eventually, one of the D.C. managers flew in from the Capital to "negotiate new terms," which resulted in a hand-written note of only 70 words that acted as the "contract" between the two entities. It stated KT would build the complex for $604 million and the VA would provide the design.

Not surprisingly, a multi-million dollar "contract" drafted on a single paper failed to provide the guidance and structure needed for such a mammoth project, but that wasn't what eventually cratered the project. In retrospect, according to the Army Corps of Engineers (ACE), the principal cause of the catastrophe was the VA's choice to move forward with the project using an "integrated design-construct" (IDC) contract model (which preceded the one-pager noted above).

With this method, the architect and contractor were expected to work together from the initial planning stages and throughout the building process, consulting and collaborating as the project matured. However, by the time KT joined in 2010, the architects had been at work designing the complex for three years, and disagreements between the two quickly stalled progress:

In 2013, KT gave up trying to work with the VA and filed a lawsuit against it for breach of contract, stating that the designs it provided could not be completed within the $604 billion budget. Instead, by KT’s estimates, the cost of the project had soared to over $1 billion. The lawsuit stopped all work at the site, and in late 2014, when the Civilian Board of Contract Appeals ruled in KT's favor, the company elected to withdraw from the project altogether. 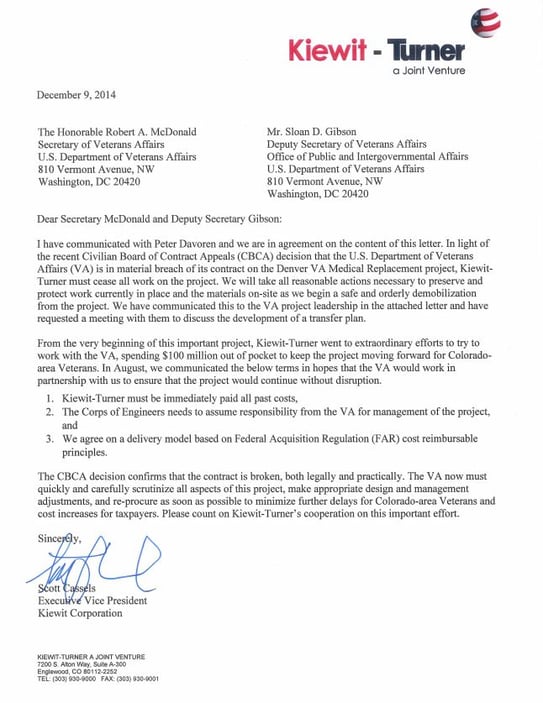 A letter from Kiewit-Turner to VA, courtesy of the Denver Post.

The Appeals Board had also noted that the VA neither had the funds to complete the project at that time nor did it have plans to ask for more money for that purpose. Congress then turned control of the project (and all VA projects over $100 million) over to the ACE.

Months later, in late 2015, the ACE concluded that the VA's contract-management (IDC) choice was the primary cause of the debacle and that completing it would take another two years and bring the total cost to $1.67 billion. ACE awarded the $571 billion completion contract to - Kiewit Turner, which picked up where it had left off two years earlier.

Updates on the Project:

The Airbus A380 fiasco ended up costing over $6 billion. What can you learn from this failed project?