Failed Project Series - What Went Wrong with the A380?

This post is part of a series of posts on some of the most prominent failed projects and how you can avoid the same pitfalls.

At a cost of over US $6 billion, the Airbus A380 fiasco was extraordinarily expensive considering that its cause was the simple reality of a failure of communication.

Noble Intent Based on an Optimistic Perspective

Since the beginning of the European Union in 1957 (which was called the European Economic Community - EEC or EC - until 1993), the many separate countries have worked to unify their activities for the good of the continent as a whole.

The Airbus aircraft company was one of the first significant attempts at collectivizing international efforts under a single industrial umbrella. In 1967, to "strengthen European cooperation in the field of aviation technology," political leaders from Germany, France, and Britain agreed to participate in the development of an "airbus" that would revolutionize transportation on their continent and around the world. 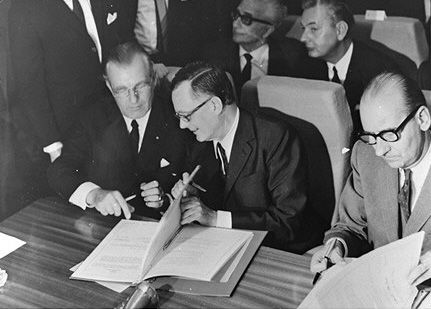 The A300 programme was launched with a milestone agreement signed by French Transport Minister Jean Chamant and German Economics Minister Karl Schiller at the 1969 Paris Air Show.

The international "consortia" also eventually added leaders from both Holland and Spain and had as its goal to be the primary competitor to America's burgeoning airliner industry. Their first project: the A300.

Accessing the Assets of Each

Philosophically, the project offered a virtually unlimited palette of resources from each of the participating countries. The efforts of high industrial achievers in one country, when combined with exceptional contributions from the other countries would, of course, result in unmatched quality and service in any industry they tackled together.

By 1968, each contributing country had identified its experts as leaders for the company and had developed a workshare program that identified who would do what, when, and (most notably) where:

German engineer Felix Kracht was responsible for making "all the pieces come together," regardless of the related flag or language of the separate manufacturers.

Organizationally, the group formed the "Groupe d'Interet Economique" (GIE) under French law with the plan being that each country would have a voice at the top level of the company while maintaining separate business entities within the separate jurisdictions.

Remarkably, from the 1970's through to the 2000's, Airbus built on its original A300 framework, adding innovations and improvements as the industry evolved. By 2004, the company had reorganized into a newly "integrated" company, "Airbus Societe par Actions Simplifee," and established a series of "centers of excellence" at its varied manufacturing sites located around the world, while maintaining its “leadership” board of Directors in France.

Its A380 project, which began in 2000, became a "truly global program" which involved as many as 1,000 companies worldwide. With an anticipated release date of 2002, the company accepted over 50 A380 orders from buyers all over the world. When, by summer 2006, those orders were still not filled, those customers demanded to know what was causing the delays. It turned out to be a culture of miscommunication and territorial divides.

Inside the Airbus A380 final assembly line, via Alex Davies / Business Insider

The fundamental challenge with Airbus was its broad international straddle, which hampered communications and injected politics and territoriality into corporate actions and decisions. While the company's reorganization had brought leadership into a single location, it did not also relocate management into a single team. Instead, individual teams, located in separate countries and speaking different languages, did not communicate with each other about what they were doing or, more importantly, the changes they had made to plans, methodologies, and schematics.

Consequently, in Germany, engineers used a legacy version of CATIA (a design software program) to develop the miles of wiring for the wings. In France, however, engineers used the updated version of the same software to create the wing structures. The two versions were not compatible with each other. As a result, the German-manufactured wiring did not fit into the French-manufactured wing configuration, and both elements required a complete overhaul before the wings operated correctly.

In all, that single (although monumental) glitch cost the company over US $6 billion to repair and set back production by another two years. Airbus wasn't able to deliver its first A380 to its first customer, Singapore Airlines, until October 2007.

Related - A Lesson in Project Failure

Industry analysts identified several elements that contributed to the debacle:

In the end, and in consideration of other failures of the company to meet customer expectations, the fundamental challenge presented by the A380 was the fundamentally flawed culture of a company that lacked a single vision and a shared set of values and beliefs. Without a doubt, Airbus enjoyed access to the world's most evolved and innovative aeronautical and aviation experts, but even that couldn't save this project from the squabbling and divisions that occurred across multiple corporate and national borders.

Today, Airbus remains Europe's top airline manufacturer. It survived the A380 disaster because its smaller, less ostentatious planes continued to satisfy customers, and because it revamped its A380 production processes to avoid further delays. In total, Airbus has delivered 215 A380s to customers around the globe. It seems to have learned the two fundamental rules of project management that were so woefully missing prior to the A380 disaster: