How to Improve Project Communication Through Better Project Reporting

In one tension-filled scene from the 1967 movie Cool Hand Luke, the Captain, a prison warden, angrily tells Luke, an inmate who has resisted his authority: “What we've got here is failure to communicate.” Indeed, the lack of communication between the two is critical to the film’s storyline…and its success.

But in the business world, failure to communicate can – and does – wreak havoc on performance. This is especially true in professional services organizations (PSOs), where so much depends on people interacting effectively to share information.

The management consulting firm Wellingtone maintains that interpreting silence, or a “lack of communication,” as the sign of a smoothly running project is a cardinal project management error. To support this claim, the company points to a 2013 study by the Project Management Institute showing one in five projects fail due to ineffective communication. According to Wellingtone, “communications is a core competency that, when properly executed, connects every member of a project team to a common set of strategies, goals and actions.”

In other words, good communication – and plenty of it – is fundamental to project management success.

Unlike other project resources, project communications are a concept and a practice, not a commodity. As such, they can take on many different forms when they occurs, for example:

But no matter the type and delivery method, all project communications require meaningful input in order to be effective. Otherwise, they are just noise. That’s where project management reports come in. It is from these resources that team members and stakeholders at all levels of project responsibility draw the information needed to make their communications meaningful – and their projects successful.

As with project communications, project management reports can come in a variety of formats:

Example of a Beyond Software report showing key project information 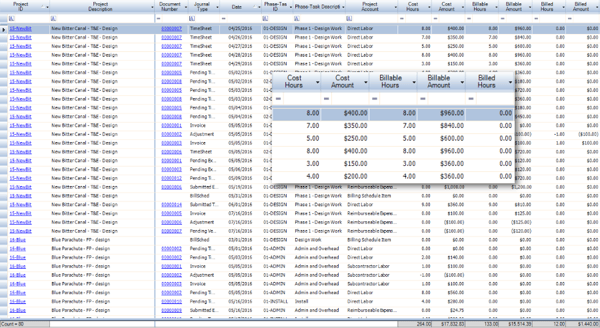 Formal business reports are narrative and analytical; they take a lot of time to prepare. Project and financial reports, on the other hand, contain the numbers-only, “just the facts, ma’am” data that show how well projects are progressing from a completion and financial standpoint. These include P&L statements, revenue and expense reports, KPI (key performance indicator) reports, and budget vs. actual reports. Usually, they are software generated.

Most project management software systems offer a wide range of classic (standard) project and financial reports – plus they typically include tools for developing custom reports. Yet at the same time, perhaps no other area of today’s project management software operations is more underused than the reporting function. Why? Because people simply don’t understand and appreciate the vital role project and financial reports can play in fostering better project communication.

Tips for Better Reporting and Communication

When you think about it, using only a small percentage of a project management system’s reporting capabilities is like hiring a consultant at a full-time wage, being vague about what you want that person to do, and then using the consultant only part-time. No responsible PSO does that. To avoid wasting one of your most valuable sources of more-effective project communication –

1. Explore the extent of your system’s reporting capabilities.

Once a new software system is up-and-running, the tendency is to jump in there and “start producing” without bothering to learn what all the software can do for you. Sure, it takes time to read all those standard report descriptions and review all those reporting options. But the minutes you invest in this activity now may save you hours of labor later on either (1) manually preparing reports or (2) correcting mistakes that result from poor communication.

Another way of saying this is “know your audience.” The Missing Timesheets report that’s so important to the Payroll department isn’t going to mean as much to the company CEO. Conversely, the P&L Statement isn’t going to have near the impact on a field consultant that it does on the CFO. Generating reports that other team members don’t need is a waste of your time and theirs. Determine which reports will help individual team members better fulfill their roles – and then produce only those reports.

In another take on the old saying “If it cannot be measured, it cannot be managed,” Crystal Lee, a PMP says, “Metrics are useful only if they are just that – useful.” Meaningful information and clarity of presentation are fundamental to good reporting and good communication. Using the report options to include unnecessary information on a report – or to carry its information to an unnecessarily deep level – does nothing to promote this.

The standard reports typically don’t cover every reporting need. To close this gap, Beyond Software includes reporting consoles that give users a customizable way of querying and grouping data. These versatile tools provide a wealth of capabilities for developing situation-specific reports, for example, grouping on multiple criteria, hiding columns, and including links to source documents. Using these consoles is a giant step forward in better project communication.

By the end of Cool Hand Luke, Luke and the Captain still hadn’t overcome their “failure to communicate.” But with wiser use of the standard project and financial reports, bolstered by the custom reporting capabilities of consoles, the same doesn’t have to be said of the projects you manage. And while this may be boring theatrically, it certainly goes a long way toward a much higher percentage of successful – and more profitable – project completions.