Charlie Steinmetz was an electrical wizard – so much so that Henry Ford hired him to design the massive generators used to supply electric power to Ford’s auto manufacturing plant. One day, those powerful generators ground to a halt, and none of Henry Ford’s technicians could get them going again. Ford called in Charlie.

Steinmetz poked around a little, made a few adjustments, and flipped the switch. Instantly, the generators came back on. A few days later, Henry Ford was stunned to receive a bill from Charlie in the amount of $10,000. He penned a note to Steinmetz asking why the fee was so steep “just for a little tinkering.” Soon, he received this reply:

While humorous, this story is one of the finest examples anywhere of the concept of value-based pricing. If your professional services organization (PSO) has typically billed by the hour, read on. Value-based pricing may not help you reap windfall profits like Charlie Steinmetz, but it could certainly improve your bottom line and your overall operations.

Charles Steinmetz, as seen on a 1983 Inventors stamp.

What is value-based pricing?

Definitions vary. Investopedia says “value-based pricing is a price-setting strategy where prices are set primarily on a consumer’s perceived value of the product or service” Charlie Steinmetz’ services weren’t worth $10,000 from a time-and-materials standpoint. But they certainly held that much value for Henry Ford, who was likely losing $10,000 or more every hour his plant was down.

"Value-based pricing is a price-setting strategy where prices are set primarily on a consumer's perceived value of the product or service."

Although value-based pricing may be unfamiliar to many PSOs, the concept has been on the scene and growing in its influence for nearly 40 years. Ronald Baker, a founder of the VeraSage Institute, a professional knowledge firm, says, “The business world pricing revolution began in the 1980s, when many of the Fortune 500 companies began to employ professional pricers, and organizations such as the Professional Pricing Society were founded to assist companies in achieving excellence in pricing for value.”

Among the earliest adopters of value-based pricing were CPA firms; law practices soon followed. Today, PSOs ranging from architects to building contractors to marketing agencies are embracing value-based pricing to boost their profits while also improving their client satisfaction. What is prompting the switch? The increasing dissatisfaction these firms have with the traditional hourly billing method.

The drawbacks of hourly pricing

Perhaps the biggest drawback to hourly billing is how it limits revenue and profit. With this method, the PSO “will always be confined by the number of hours in the working day,” says Steve Penfold, Director of Elucidat, an elearning company. “The most money you can make in a day is: day rate x number of billable staff.”

“The traditional billable hours model puts a ceiling on a professional’s earning potential and surrenders the benefits of recent efficiency gains,”

Other shortfalls of hourly billing may be just as serious to PSOs, for example, turning professional services into a commodity or providing no motivation for team members to do their work efficiently. For a comprehensive discussion of the subject, see the article “Is charging by time damaging your agency? Value-based billing could be the solution” by Tara West.

The advantages of value-based pricing

Proponents of value-based pricing maintain that it offers a variety of advantages over the hourly billing method. Here are four of the most important ones, according to CPA Jason Ackerman: 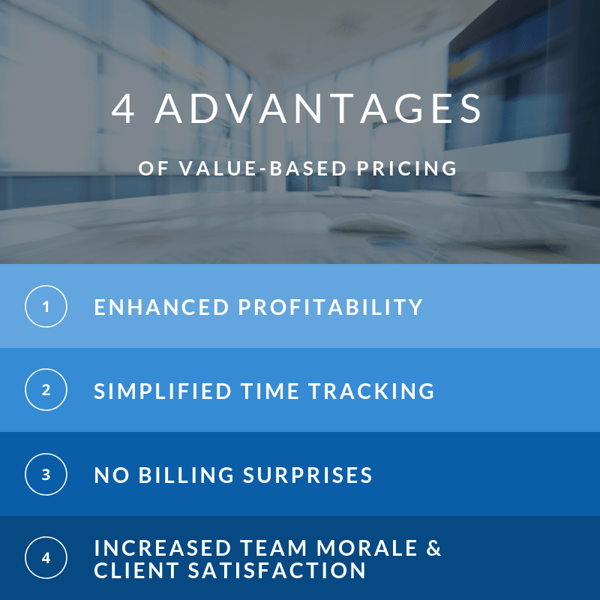 Ackerman say that with value-based billing, profitability increases because PSOs “can charge what the service is worth to the client…not how much time it takes to complete it.” This is especially true when prices for services, client expectations, and PSO responsibilities are carefully worked out before the project start date.

Nobody likes filling out a timesheet. Remembering the tasks performed can be difficult; qualifying the time spent on each task can be just as hard. Value-based pricing sets the fees for services up front to remove most of the monotony of detailed, to-the-minute time tracking. In most cases, just monitoring in general the time required to complete each service (e.g., hours and half hours) is more than enough to ensure that the fee charged for a service is well aligned with the time needed for service delivery: not too high – and certainly not too low. When Ackerman’s firm switched to value-based pricing, productivity increased “because less time was spent on keeping track of time.”

For clients billed by the hour, their regular invoice is an open-ended mystery that can either bring a pleasant surprise…or deliver a jolt to the nervous system. Value-based pricing removes this uncertainty by allowing them to know up front what their fee for services will be. Jason Ackerman states that it also has the added benefit of simplifying invoice preparation: “just one line containing the price.”

Ackerman recalls that after his accounting firm moved from hourly billing to value-based pricing, team member morale improved because their focus had “shifted to their actual work instead of distractions…such as keeping a detailed account of time.” Freed of burdensome administrative tasks, they provided superior customer service that led directly to increased client satisfaction.

For more advantages of value-based pricing, see Ronald Baker’s article “Pricing on Purpose: How to Implement Value Pricing in Your Firm.”

The other side of the value-based pricing coin

Without question, value-based pricing is making significant inroads in today’s professional service organizations. For example, in “Project Versus Fee-Based Billing: Charge for Value, Not Hours,” Dann Anthony Maurno cites a report by the A/E/C (architecture, engineering, contracting) consulting firm PSMJ Resources that says value-based, lump-sum contracts now account for about 50% of A/E/C contracts – up from only 10% in 1990.

Not everyone in professional services has been so quick to embrace the concept, however. In part 2 of this series, we’ll look at some of the weaknesses people see in value-based pricing that they believe make it a less-than-ideal pricing approach for PSOs. We’ll also discuss the how-tos of implementing the value-based pricing system plus consider some of the variations of this model that can better adapt it to specific situations.